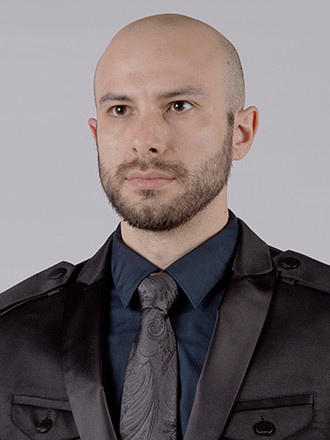 Jesse Scroggins has a natural eye for movement and design. After graduating with a degree in Graphic Design from The Art Institute of Dallas in 2004, he began working for top-notch merchandising companies in DFW. Jesse currently works as a Senior Designer for Dezine News. His product designs have been sold in stores such as Wal-mart, Target, JC Penney, Nordstrom, Neiman Marcus Last Call, and Banana Republic Factory Store. One of his belts has been featured on CBS Network’s The Big Bang Theory worn by the eccentric astronaut Howard Wolowitz (played by Simon Helberg). Another one of his belt's was worn by actor Keanu Reaves in the movie John Wick.

Jesse dove into dance photography when Amanda Jackson (to whom he his now married) commissioned him in 2008. He has been the Resident Photographer for Big Rig Dance Collective since 2010 and is becoming a regular contributor to their creative process. Jesse frequently works with other professional artists and companies such as Jordan Fuchs Company, Simple Sparrow, Christie Nelson of Grid Dance Theater, Texas Woman’s University Department of Dance, and University of Texas at Arlington's Theatre Department.